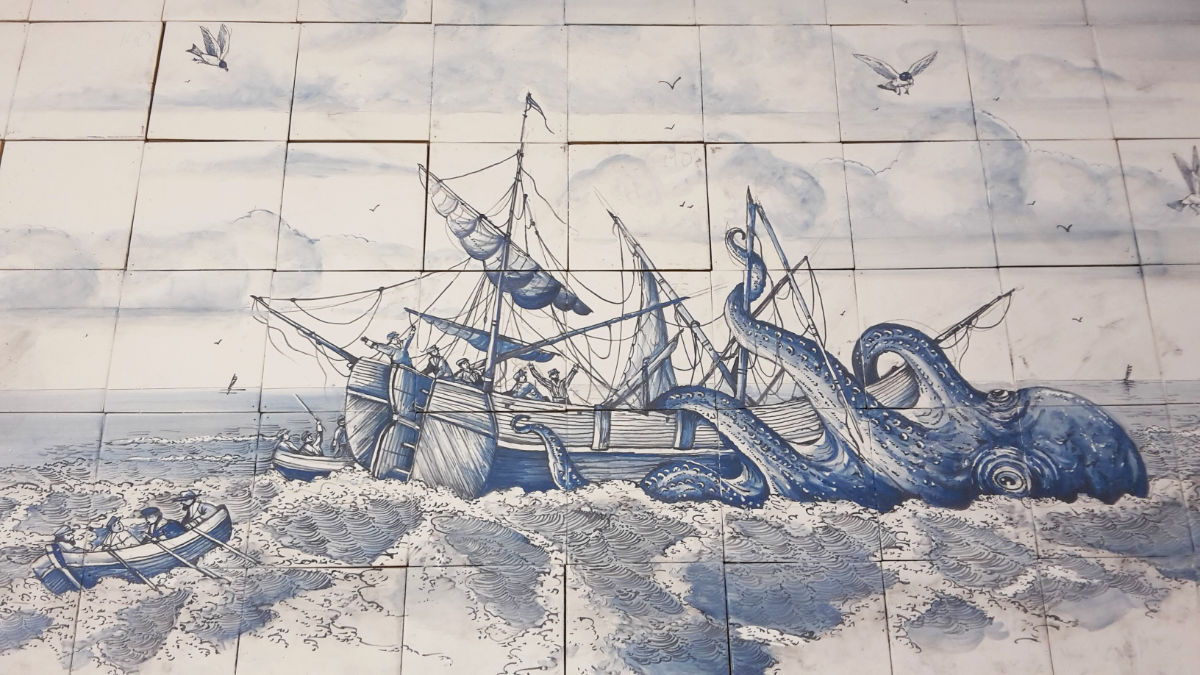 This piece was originally published on http://www.denieuweschepenvandoeksen.nl:ambachtelijke tile pictures

“Add Johnny Depp? That is possible! ” laughs Lucia. “Harm can shake him right out of his sleeve!” Lucia Bazzano and Harm Posthumus have now been working for over four months on eight traditional tile pictures for the new ships of Rederij Doeksen. Four times Terschelling and four times Vlieland. “But it doesn’t get boring,” says Lucia, “they are all so different.” The idea for incorporating this craft into the interior of the new ships came from design agency Vripack, which was responsible for the design of both the interior and exterior.

In April of this year, Rederij Doeksen organized a drawing competition for the Vlielander and Terschellinger primary school students of groups 5, 6, 7 and 8. They were asked to draw the most special places on their island. The most beautiful drawings are now immortalized by the two pottery painters on hand-formed tiles. The winner of the most beautiful drawing was a student of OBS ‘t Hunnighouwersgat from Midsland. She came to Harlingen together with her classmates and teacher at the end of June. Here the students were received by Cloth Director Paul Melles, who told them all about the new ships. The class was then given a tour of the Harlinger Pottery Factory, where they could view the first paintings. All drawings could be admired in the Harlingen ferry terminal throughout the summer vacation.

“Beautiful, isn’t it?” Lucia says, pointing to one of the scenes. “This seal is clearly drawn by a child, so fantastic! I tried to reproduce that style and drawing as precisely as possible, for example the thickness of the lines. ” Harm and Lucia arrived shortly after each other 28 years ago at the Harlinger Pottery and Tile Factory. “Like greens,” laughs Harm. He was already able to draw and paint nicely, but internally, like Lucia, he was further trained in the specific profession as a pottery painter. Today they are the most accomplished painters in the company. Together they worked on various large projects intended for the Netherlands and abroad. “We each have a very different style,” says Harm. “But when we work on a project together, we coordinate it very well.” The traditional tile pictures for the new ships show the islands of Vlieland and Terschelling, containing the drawings of the primary school students. The empty spaces in the sea are filled with scenes of clippers and sea monsters. Like a huge carrack that encompasses a sailing ship with its long tentacles. It could be a scene from Pirates of the Caribbean! But also the Geelvink, Willem de Vlamingh’s ship, can be recognized, Willem Barentsz himself and the new ships of Doeksen.

“Approximately 250 hand-formed tiles were used per panel,” says Rikus Oswald, owner of the Harlinger Pottery and Tile Factory. “The clay for this is largely sourced locally and mixed with limy marl.” The factory produces the traditional tiles in the same way as the first Harlinger factory in 1598. The tableaux will soon form a beautiful contrast with the sleek design of the aluminum ships. “There is so much to see on it,” says Lucia. “We are very curious what the passengers, but especially the school children who signed for this, will think of it!”